I haven’t been back to Tufts in several years, but when I heard that they were having Lance Armstrong speak at the Commencement address, I just had to go.

Now I’ve done a moderate amount of biking over the years, at least 14,000 miles that I’ve kept track of.
– I’ve ridden thousands of miles on the unforgiving streets of Cambridge, Somerville, and Boston – the most bike un-friendly city in America
– I’ve ridden the roads of Indiana, like in “Breaking Away”
– I’ve laughed as I passed exotic sports cars stuck in Chicago traffic
– I’ve ridden with the elk and bison in Wyoming
– I’ve gotten yelled at by the Secret Service for locking my bike to the fence at the Denver Mint
– I’ve cruised along the boardwalk in Santa Monica
– I’ve ridden with the multitudes in Japan
– And, I’ve crossed the Golden Gate Bridge and tackled the hills of San Francisco, tires squealing in protest against the bricks of Lombard Street – and gone ballistic off the flats of the hills, like Steve McQueen in “Bullitt”

But none of that compares to what Armstrong and the other guys do in the Tour de France.  They ride over 2,000 miles in one month, with some stages of over 100 miles in the rugged Alps!  It is just an heroic feat, orders of magnitude greater than anything I’ve ever done on a bike.  It is just mind-blowing what they accomplish.  And he won SEVEN times.  Wow!  So, anyway, I had to go see him at my alma mater.  He was entertaining, amusing, humble and still inspiring.  One of my photos is below.  You can check out more online at: 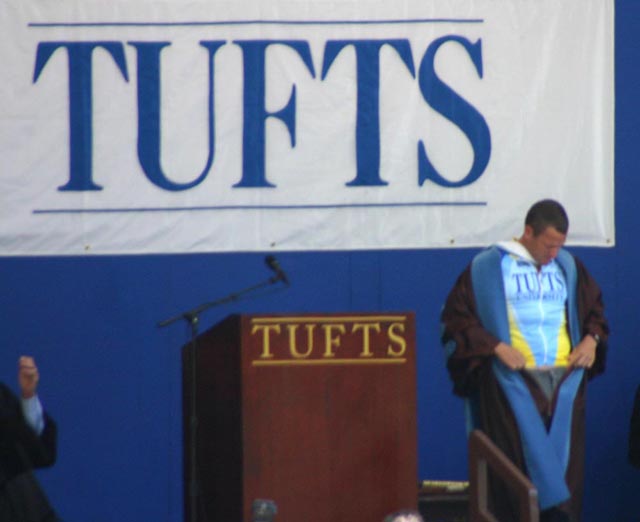 This entry was posted in Personal, Pics. Bookmark the permalink.