This week on the bike & New York Times article on nutrition

Okay, this week I managed to go biking three times.  On Sunday I went up and down the Charles River [links one, two, three] (and ruined a tire and tube on innumerable tree roots, potholes, sewer grates, and skidding to avoid a car running a red light).  Thursday I rode leisurely with the guys from work, and on Wednesday I rode with the guys from Landry’s bike shop.  Their so-called intermediate group somehow joined their fast group, and they dropped me like a rock even though I was averaging over 18 mph at the time.  I had to take a shortcut to catch up with them… 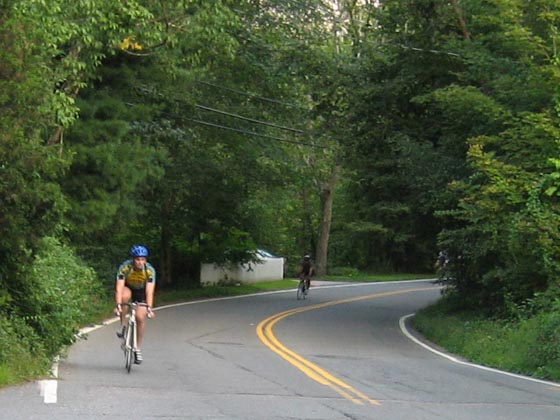 …anyway, on the last leg of the ride, after the final three big hills, I was about spent.  I’ve never been good with nutrition, and I hadn’t kept hydrated that day.  End result was my right calf had enough and cramped up.  That’s it, no more, going on strike, it’s over.  So I coasted the last half mile downhill to the shop – and killed my average speed – down to 17.4 mph.  Oh well.

Coincidentally(?), the next day the New York Times had an article about people like me who don’t pay proper attention to hydration and nutrition…

Secrets of Endurance: Eating to Go (and Go and Go)
By CATHERINE SAINT LOUIS, The New York Times, August 24, 2006 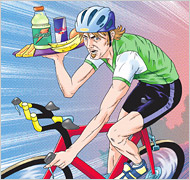 MOST people worry about consuming too many calories. Endurance athletes who race for hours worry they havent devoured enough. They know what many beginners who enter marathons, century rides and triathlons dont: that without adequate carbohydrates and electrolytes during exercise, their legs will go on strike, their senses will take leave and a full-blown bodily insurrection will take hold.Dozens of energy gels, bars and sports drinks now on the market have made it easier to get calories on the move. But even when it seems every last detail has been planned, variables like heat, humidity and jitters can wreak havoc.

Chris Legh, a lanky Australian triathlete, is a famous victim of bonking, the term athletes use to describe the equivalent of running out of gas in the fast lane of the Long Island Expressway. His meltdown at the 1997 Ironman championships was so vivid a cautionary tale that a Gatorade commercial immortalized it.

A stones throw from the finish line, Mr. Leghs limbs went as limp as a rag dolls because he was woefully dehydrated and underfed. One moment he was striding. The next, he had collapsed.

You can do all the training in the world, but if you go out too fast, or if you make a mistake with your nutrition, then your day is done, Mr. Legh said.

The bonk is not a lot of fun, he added. Sometimes it catches you before you know it.

Unlike camels, humans werent designed to go the long haul without sustenance. Carbohydrates in the form of glycogen are stored in the muscles and liver. But a full tank lasts only 60 to 90 minutes during vigorous activity like a mountain climb. Topping off energy reserves from the get-go helps prevent bonking and boosts endurance, so anyone who exercises that long would benefit from 50 to 60 grams of carbs an hour.

Taking in glucose during exercise will help offset muscle glycogen depletion, said Monique Ryan, the author of Sports Nutrition for Endurance Athletes and a registered dietitian. Studies have shown if you start doing it earlier on, you can prolong exercise.

Most elite athletes today realize that what they eat and when they eat affects not only race-day performance but also how quickly they can recover from workouts.

Its the rest of us who have been slow to catch on.

Novice marathoners often try to go the distance on too few calories, which is why the masses often lose focus and leg speed between mile 20 and 22, sports nutritionists say. Its not willpower they lack. Its carbs.

Running her second marathon a decade ago, Lauren Antonucci, then a track competitor at the State University at Binghamton in upstate New York, hit a wall three hours in. Everything went black, said Ms. Antonucci, a registered dietitian and the owner of Nutrition Energy in Manhattan. I saw spots. My legs got extremely heavy feeling and my muscles suddenly felt awful.

During that ill-fated race, she hadnt kept track of her fluids or energy gels because, she said, she was young, dumb and happy.

Ms. Antonucci, who now competes in triathlons as well as marathons, has a nutritional game plan she has honed through trial and error. For every hour of vigorous exercise, she takes in 32 ounces of fluid and roughly 250 calories  energy gels while running, peanut butter and jelly sandwiches on the bike. (Figuring out how much to drink per hour of exercise is easy: Just use a scale before and after an hour of a workout. Each pound lost requires 16 ounces of replenishment.)

The need for calories is just as important during training. It wasnt until she met with two nutritionists that Shelley Lawrence, a 40-year-old principal of a school in Westwood, Calif., realized she was asking her body to do the impossible: endure 30 miles a week of marathon training on a stingy amount of calories. I live in L.A., she said. The expectation is that women dont eat that much.

Nancy Clark, a registered dietitian and the author of a best-selling sports nutrition guide, persuaded her to eat more by using this logic: If your little baby were crying, and you didnt feed it, that would be called child abuse, Ms. Clark said. If youre hungry, its called, Oh, Im on a diet. But its still abuse and it takes a toll.

On a low-carb diet, Ms. Lawrence not only failed to replenish her stores of glycogen, she also hampered her ability to rebound from long runs. Studies have shown that eating carbs within 30 minutes of exercise helps speed the making of muscle glycogen. Protein eaten right away can help heal muscles. By increasing her overall caloric intake and eating pretzels during a half marathon in October, Ms. Lawrence hopes to avoid the shivers and wobbly legs she has experienced in past races.

Lisa Dorfman, the sports nutritionist for the University of Miami who has done dozens of marathons, said there are at least three reasons why an athlete can hit a wall.

Dehydration  or what Ms. Dorfman calls a fluid bonk  is relatively easy to recognize; youre thirsty and dull-headed.

An energy bonk can feel as if your legs are mired in quicksand or as if your brain suddenly says no more, like Forrest Gump did at the end of his cross-country trek. Ms. Dorfman advised drinking a sports drink, or eating a citrus slice or banana, to boost glycogen and increase blood sugar.

Lastly, an electrolyte bonk is a depletion of minerals like salt or potassium, which aid muscle function. Its victims often see dots, feel nauseated, cramp up or have persistent headaches. (The cure? Ms. Dorfman eats pretzels or drinks electrolyte-rich fluids like Pedialyte or Gatorade).

Competitors dont necessarily crave food midrace, which is why bonking is an ever-present threat. Some athletes set watch alarms to remind themselves to swallow a gel or take a swig of a sports drink. Others, like adventure racers, whose multisport competitions can last from a half dozen hours to several days, train their stomachs to be able to digest everything from turkey jerky to string cheese as they compete.

Rebecca Rusch, who won the 24-hour national mountain bike championship last month, runs, paddles, bikes and mountaineers as part of a team of four adventure racers who carry replenishment with them. To prepare, she fills dozens of Ziploc bags so she can easily get her fill of 200 to 300 calories an hour.

A decade ago, Ms. Rusch packed a lot of comfort food like Cheetos and chocolate-covered espresso beans, which she admits were not super nutritionally. These days, her staples include whole foods like dried fruits and nuts as well as free drinks from her sponsors: Perpetuem, a meal replacement powder thats easy on the gastrointestinal tract and tastes like Dreamsicles; Heed, an electrolyte drink, and Red Bull, which she dilutes with water.

Still, because eating while racing isnt natural, she sometimes bonks even though her backpack is full of nosh. Then she questions her stamina, her will to win, everything but the elephant in the room. Im in denial that its all about my food, she said. Given an hour of downtime spent eating carbs, she usually bounces back.

Not every racer is so lucky. Dennis Meeker, a 35-year-old triathlete from Boulder, Colo., has slow metabolism so he needs to eat relatively little in the roughly nine hours it takes him to do an Ironman triathlon (2.4-mile swim, 112-mile bike, 26.2-mile run).

But in June, at the Coeur dAlene Ironman in Idaho, he polished off extra PowerBars on the bike because he thought the heat would prevent him from eating during the last leg. Thirteen miles into the foot race, with little water in his system, he had caught the man in second. Then, Mr. Meeker said, I just couldnt put one foot in front of the other. There was cement in my legs and gut.

That meant the race was over for Mr. Meeker, who then set off to figure out what went wrong. Comparing past successful triathlons to this gut wrencher, he calculated that the difference came down to a common problem (too little water) and a surprising one (too many calories, which sat like a lump in his stomach). Next time, he plans to ease off the PowerBars.

This entry was posted in In the News, Personal, Pics. Bookmark the permalink.